Muhammad Iksan, an 11 year-old fifth grade student of 013 Buluh Perindu Public Primary School in Tanjung Selor, Bulungan District, North Kalimantan stood in front of a crowd. At least a hundred people was watching Iksan, as he is usually called, tell a story. With confidence, the fifth grader carefully articulated a story about protecting the environment. His facial expression was serious, deeply engaged in the story he was telling. Iksan was a part of a folklore storytelling competition hosted by the Library and Achives Office of Bulungan District on 29-30th June 2021. The competition was a part of Bulungan District government’s campaign to increase reading interest among school children in the district.

The storytelling competition required the participants to tell the story without reading the text. They have to remember the story from a selected text by heart and show distinctive facial expressions and voice articulation. The more expressive their performances are, the better the story is delivered. 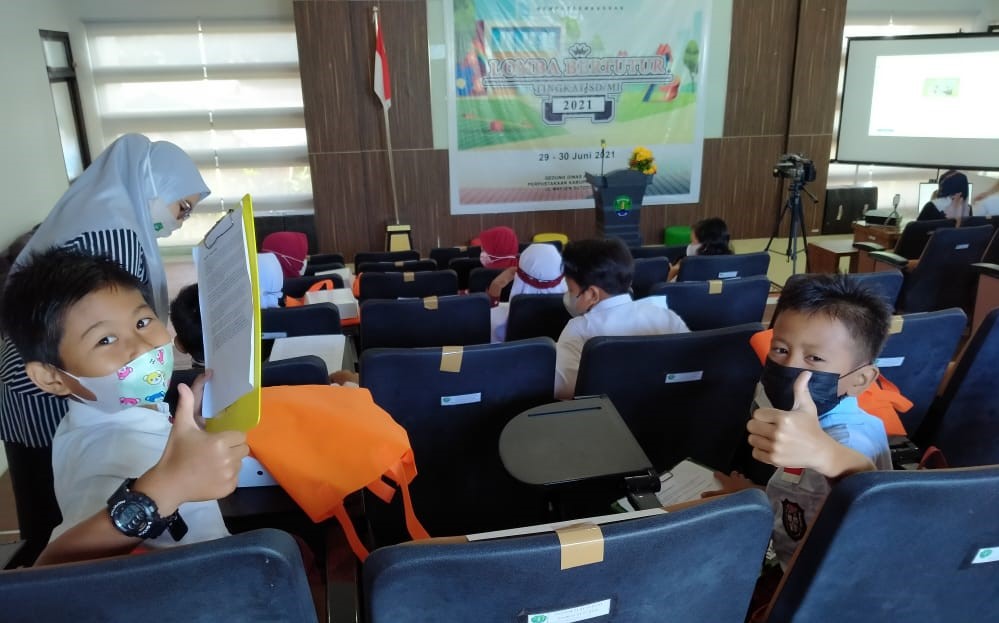 Muhammad Rifai and Muhammad Iksan on standby for the stage. Photo by: Education and Culture Office of Bulungan District Documentation.

The competition awarded Iksan a first honourable mention, which meant that he came fourth in this competition up against his peers at his level. For Iksan and his school, this award was very special. This was the first time that his school participated in such competition, usually only won by prestigious schools. It was even more special as just two years ago, Iksan had challenges in reading.

“For us, from the school and sub-village government, receiving an award is a remarkable achievement. On top of that, it was our first attempt to join the Folklore Storytelling Competition at the district level. We did not expect them to win. Participating in the competition was enough for us. Moreover, the winners of the competition were usually coming from prestigious schools in the central area of Tanjung Selor City,” Warsiyah, the Principal of 013 Public Primary School,Tanjung Selor, enthusiastically shared. 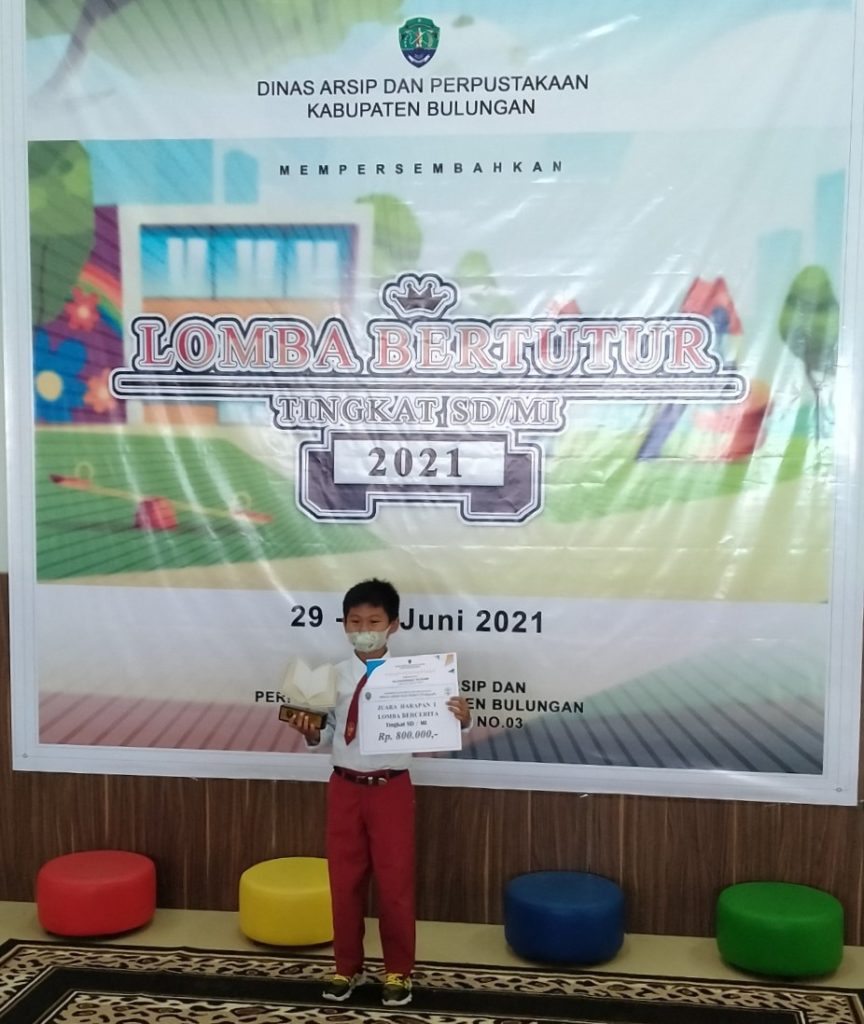 Literacy is in the heart of the Bulungan government’s campaign in education. The 2016 Indonesian Student Competency Assessment or AKSI by the Ministry of Education and Culture revealed that 60.67% of fourth-graders in North Kalimantan had low reading skills. In Bulungan, similar results were found by INOVASI in 2017. Only 57% of the early graders tested passed the basic literacy test involving recognition of letters, syllables, and words. Further testing revealed that those who passed the basic literacy test had the average reading comprehension score of only 49.9 points. This means that even when some of the children were fluent in reading words, they did not always understand the meaning of what they are reading. Iksan was one of these students with weak reading comprehension.

Muhammad Rafa’i or Pi’i, currently a fifth grader, was another student that was chosen to participate in the competition representing the school. Although, Pi’i did not win, participating in the competition alone was an achievement for Pi’i. When he was in the second grade, he failed his basic literacy test. Both were chosen due to the significant improvements in literacy learning.

“I have a special reason why I chose them. Pi’i has shown significant development in literacy learning. Although he didn’t pass the basic literacy test three years ago, he still managed to catch up. Now Pi’I is a fluent reader and enjoys reading, while Iksan can now quickly grasp different literatures and explain them in his own words,” Warsiyah added.

Even though Pi’i did not win any prize, the confidence that he showcased during the competition is highly worthy of appreciation. For fifth-graders like Pi’i, performing storytelling in front of hundreds of people definitely required immense courage. The committees of the competition awarded trophies for all participants, including Pi’i. These trophies were presented as rewards for their participation, bravery, and confidence during the competition. For the school, both Iksan and Pi’i are champions.

According to Warsiyah, the school started emphasizing on building a reading culture since 2017, not only in class but also outside of the class supported by the community. The students usually practiced story telling in front of the class using Big Books, large sized books with illustrations created by teachers or students themselves. In the morning, students received learning on literacy in class from their teachers. In the afternoon, they continued with additional reading activities from the Pelita Hati Community Reading Park (Indonesian acronym for Community Reading Park – TBM). This TBM was formed by the school community to grow and strengthen the students’ interest in reading. The TBM is located one hundred meters from the school. 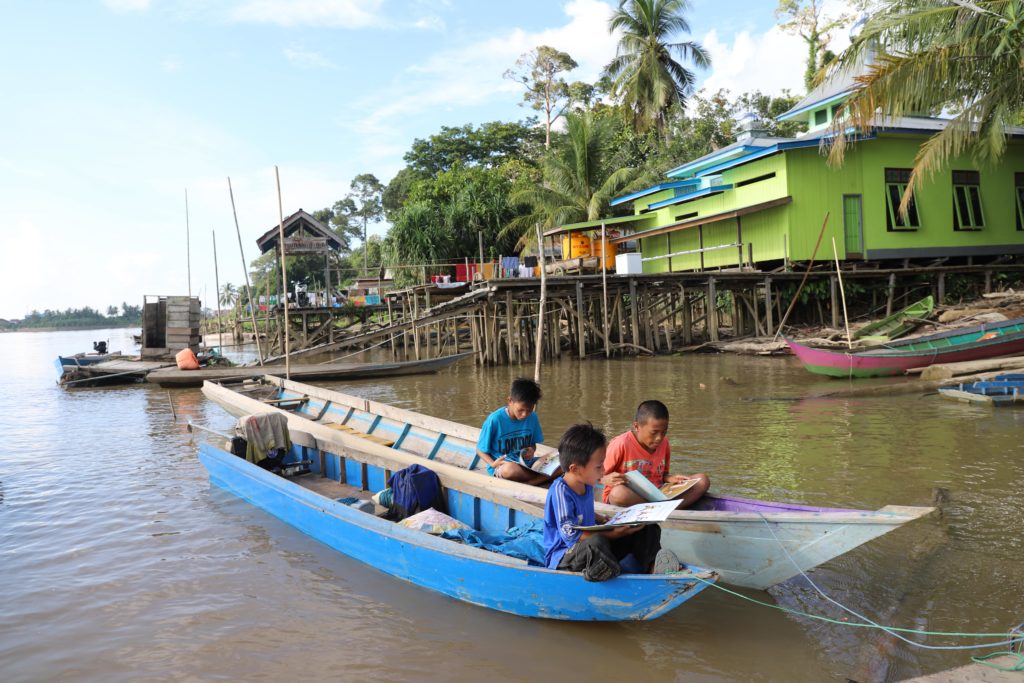 Muhammad Rifai reading a storybook on a ketinting (wooden boat) moored on the bank of Kayan River. Photo by: Education and Culture Office of Bulungan Regency Documentation.

Achievements of A Pilot Program

The Bulungan District government supported by the Innovation for Indonesia’s School Children (INOVASI) program started the early grade literacy pilot program pilot in 2017 in seven primary schools. One of them is 013 Buluh Peridu Public Primary School, Pi’i and Iksan’s school. Four years on, the results of the pilot program are starting to show. The pilot program was also implemented in two other districts in North Kalimantan in Tana Tidung and Malinau.

Responding to the poor reading skills in early grades students in Bulungan, the Education and Culture Office in Bulungan, focused on three strategies:

1.  Supply of children’s books
Generally, due to limited resources to purchase books, schools focused on learning text-book supply. This was unsuitable for children who are learning to read. In 2018, Bulungan government allocated resources from the Regional Budget (APBD) through Regional School Operational Assistance (BOSDA) program to allow purchase of age-appropriate children’s books. Every school in the district was provided with the resources to purchase at least five books that focused on the students’ imagination and characters which allowed for development of comprehension skills, creativity, and good logical thinking, as well as positive character building.

2. Improving teachers’ capacity
The principals, school superintendents, and teachers were continuously supported to strengthen their capacity to support students’ learning. This was done through the development of an independent Teachers’ Working Group (Indonesian acronym – KKG) program. The program was designed by focusing on the use of tested learning modules and methods, trained facilitators, and sustainable financing. These were found as the strengths of the KKG model developed in the Bulungan District.

3. Assistance for slow reading students
Bulungan District Government has also provided special assistance for slow reading students through differentiated learning. It is an integrated approach through in class learning, extra study time and guidance both in school and through the Community Reading Park (TBM). The program implemented a series of training for all necessary skills for teachers, such as developing formative assessments, preparing learning materials according to the students’ readiness/capabilities, and choosing the learning guidance. Likewise, TBM activists have received training to assist the students in learning to read.

Positive impacts shown by Iksan and Pi’i are a result of collaborative efforts by the government, teachers, and the community in improving students’ literacy skills. Strong literacy skills in early grades, serves as a foundational skill useful for continuous learning. However, the benefits do not only benefit the children individually. Effective literacy skills are tied to improved security, stability and economic growth. When Indonesia has more students with improved literacy like Iksan and Pi’i, the country’s security, stability and economy will also be stronger.