Yandri’s initiative to collect unused items came to be after seeing the condition of empty classrooms. This condition has remained the same since the school asked him to teach as a grade 2 teacher in 2010. Yandri is actually a religious instructor who was assigned to teach Sunday school near SDN Patembu. However, since the school was short on teachers, he was asked to teach grade 2 students.

After collecting various items, Yandri and his fellow early grade teachers turn unused items into reading materials with various forms and uses. Some are used as ‘market corners,’ where students learn to read from the labels on the food and beverage packages. Others are made into “word cards” and hung on the classroom wall, which becomes a “wall of words”. There is also a “tree of knowledge”, where the children learn to recognize words that are relate to each other. 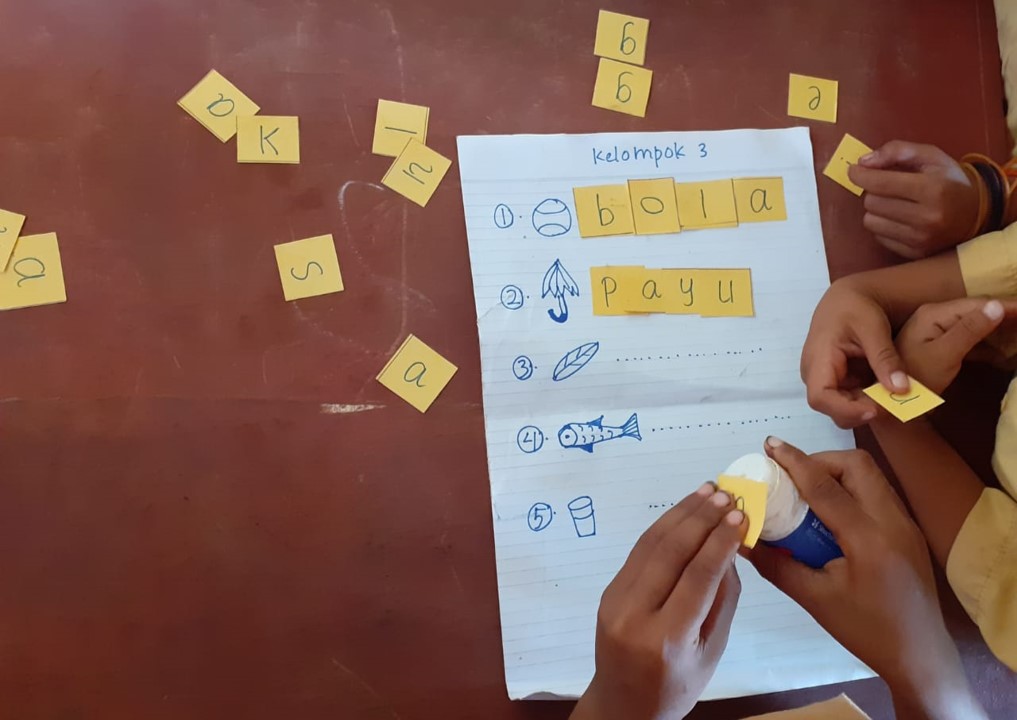 The presence of these various learning media has proven to improve the students’ enthusiasm to learn in class. “The children don’t want to go out when the recess bell rings. They stay in the classroom and try to read the writing on the various media,” Yandri stated. And it’s not just grade two students who are interested in those media—higher grade students also enter the grade two classroom during recess to read the literacy displays.

The use of this media also helps students recognize the alphabet and words more quickly. On the “wall of words”, for example, each word is accompanied with relevant illustrations to make it easier for students to recognize certain words or letters. The letter A, for example, is introduced with the word ‘Ayam (or chicken) and is accompanied by a picture of a chicken. The choice of words and illustrations that are used is aimed at making it easier for students to link what they have learned with everyday life.

Other materials, such as empty mineral water bottles, are used to enrich the students’ vocabulary. In order to make them more attractive, Yandri colors the bottles, makes them into some kind of decoration, and displays them in the classroom.

“What is this?” asks Yandri, as he unfolds the water packaging that has been strung together.

“What is the first letter of gelas?” asks Yandri again.

“What other words start with G?” probes Yandri.

The students then reply one after the other with other words that start with the letter G.

According to Yandri, the students’ improved abilities can be seen from the progress in their reading skills. He admits that before the early grade literacy program began, which is a collaboration between the Regency Government of Central Sumba and INOVASI, there were still students who did not know the entire alphabet. However, thanks to the training and mentoring that he received, various ideas came to him to make learning activities more meaningful. And thanks to the media that Yandri has developed and the learning strategies he has received during the training, his students can now read syllables; some can even read simple sentences, though they are not yet fluent.

This success has encouraged the teachers in the higher grades to replicate what Yandri and other early grade teachers have done and are continuing to do. Those teachers are now trying to make their classrooms more literate.

We want to hear from You! INOVASI Program Communication Survey