The Grand Design for Education and Culture in NTT Province

In addition, the quality of learning in most grades is still low. In 2014, the assessment results of grade two elementary school students in NTT showed that only 22.3% of students read fluently and understood the reading content. Meanwhile, 27% did not understand the concept of words, 28% did not understand the concept of syllables, and the remaining 22% did not know the concept of letters or the alphabet even though they had attended school for two years (RTI/USAID). According to BPS data from 2017, the stunting rate in NTT was at 40.3% high. Stunting can affect a student’s ability to learn, which contributes to the student’s quality of learning.

All of these problems play a role in the low Human Development Index (HDI) of NTT. NTT has been consistently ranked at 31 or 32 out of 34 provinces in Indonesia since 2010. Various studies have shown that the development of a country is determined by its quality of education—through education, the quality human resources (HR) can be prepared for the future labor market.

To date, NTT is part of the pre-bonus demographic group due to its high birth and death rates. In addition, the population that is of productive age (15—64 years old) is still lower than the population of non-productive age (under 15 and over 65 years old). In fact, 2020-2030 is a period of demographic bonus opportunities for 776,000 students in NTT who are now attending primary and secondary education. With this in mind, the local government and all of the stakeholders need to prepare these students so that they can benefit from this opportunity by 2030.

Looking at these challenges and opportunities, and in line with the vision of “NTT Arise, NTT Prosperous”, the Governor of NTT, Viktor Bungtilu Laiskodat has invited all district governments across NTT to work in synergy and make a collective commitment to prepare the 1.35 million children in NTT to have the competencies necessary in the working world so that they will be able to compete in the labor market.

For this purpose, Governor Laiskodat through the Education and Culture Office of NTT, drafted a Grand Design for Education and Culture in NTT. The Grand Design is a planning document that is both strategic and operational. It has been designed according to the strategic issues, objectives, goals, and strategic policy directions to achieve educational development goals that are based on the achievement of the government’s sustainable development goals (SDGs).

The drafting of the Grand Design involved various stakeholders, such as the Ministry of Education and Culture, the National Development Planning Agency (Bappenas), the NTT Provincial Government, representatives from 22 districts or cities, education units, NGOs (local, national, and international), the Institution of Educational Personnel (LPTKs), and education and cultural practitioners. INOVASI, who has been working in NTT since 2017, especially in Sumba, helped organize a series of workshops in order to draft the Grand Design while being part of the Grand Design drafting team. 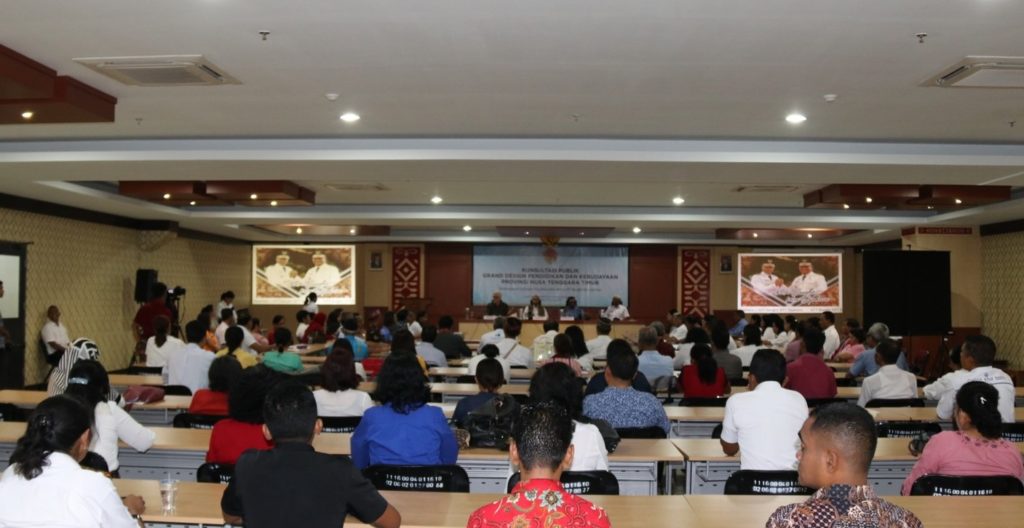 This is the first time the Grand Design initiative has been carried out in NTT since Indonesia gained its independence, and it will be in effect for the next 10 years. The drafting process of the Grand Design consisted of five stages. The first stage was a three-day workshop in Kupang that started on 11 September 2019 at the Education and Culture Office of the NTT. During this inaugural workshop, the participants analyzed the educational and cultural situation and discussed tiered and cross-level strategic issues. The workshop was attended by 56 participants, including resource persons and contributors, and it resulted in documents being drawn in the form of formulation of strategic issues and the Grand Design document framework.

The second workshop was held on 9 and 10 October 2019 at the Education and Culture Office and with approximately the same number of participants as in the first workshop. During this workshop, the vision and mission of NTT was elaborated in the formulation of the strategy to achieve the Grand Design goals based on the educational and cultural analysis results that were made during the workshop in the first phase.

The next stage was formulating the direction of NTT’s educational and cultural policies by integrating the indicators of the program and activity achievement goals into the planning and budgeting. This process was carried out during a workshop held from 11—13 November 2019 in Kupang. The workshop resulted in an integrated action plan between education levels, local bureaucracy (Organisasi Perangkat Daerah, or OPD), and government structures.

After all the elements of the content were successfully finalized through the series of workshops, the Working Group (Kelompok Kerja, or Pokja) for the drafting the Grand Design proceeded to the fourth stage, which was compiling the draft document. At this stage, the INOVASI team, with their expertise and experience of working in the field of education and their program achievements in Sumba, were entrusted to extract the results from all of the workshops and draft the Grand Design document. This process took place in November 2019.

On 12 December 2019, the Education Office held a public consultation, which was the final stage of the Grand Design document preparation. This activity was aimed at socializing the Grand Design in order to collect inputs from the wider stakeholders—especially to synergize the provincial, district, and city activities in implementing programs and activities in relation to the quality, access, character education and cultural values​, and education and culture governance. Governor Laiskodat and a number of leaders and representatives of regional governments throughout NTT attended this public consultation. 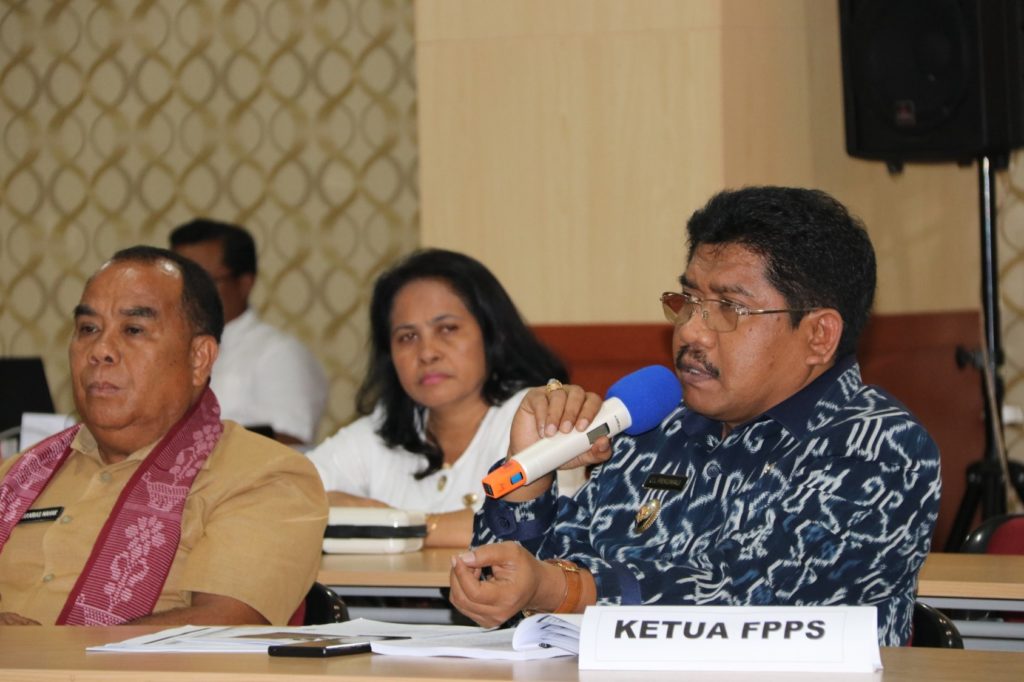 In his remarks, Governor Laiskodat noted his hopes that the drafted Grand Design would help achieve the vision of the NTT government. He stated, “The Education and Culture Grand Design in NTT is expected to bring forth our common aspirations that lead to the vision of “NTT Arise, NTT Prosperous” through hard work, smart work, and fast work, in order to improve the competitiveness of the human resources in NTT.”

After the Grand Design has received various inputs, it will be refined into technical implementation steps in the form of a roadmap. These steps will be carried out entirely by the NTT Provincial Government together with all relevant OPDs; however, INOVASI will continue to oversee the process and contribute expertise, such as resource persons, when needed. This was conveyed by Mark Heyward, the Director of the INOVASI program, at the closing of the public consultation activity.

“The implementation of the Phase I INOVASI program technically ended in December 2019, but we will continue to provide support, such as sending resource persons during the roadmap preparation process. What is more important than that, however, is that the Grand Design belongs to the provincial and regional governments and that it is implemented,” Mark concluded. 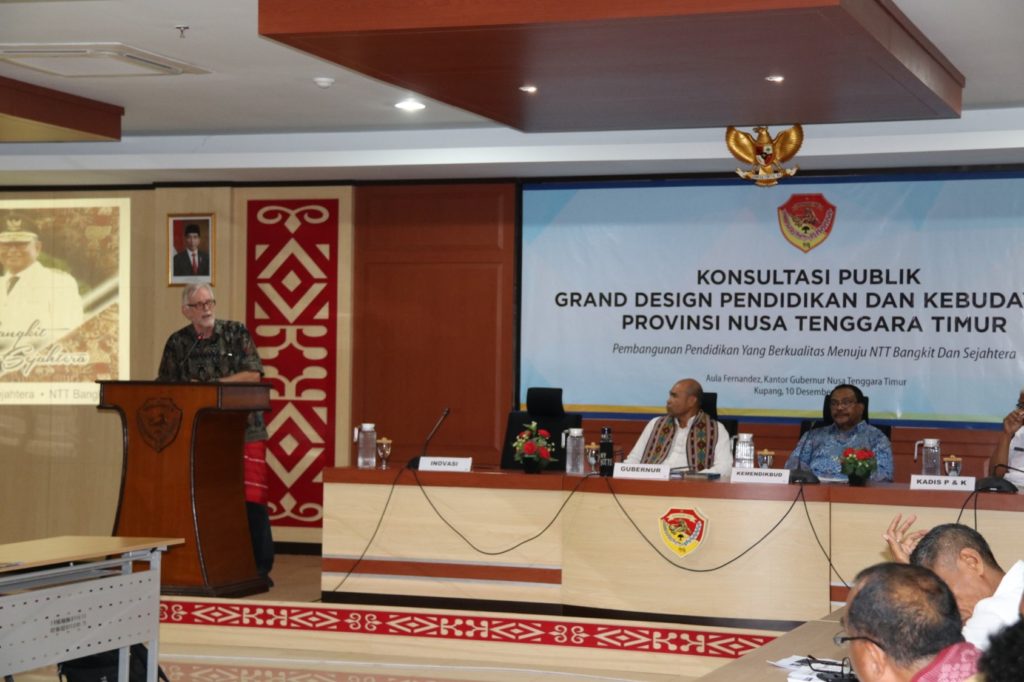 We want to hear from You! INOVASI Program Communication Survey