Rufina Kaleka has served as a teacher at Mata Kapore Catholic Elementary School for the last seven years. This school is in Mata Kapore village, Kodi Bangedo district, Southwest Sumba regency. Even though the village is a small and remote, there isn’t any significant difficulty for Rufina to access her school because she is a local resident and does not live far from the school.

However, being a school teacher in a remote area is filled with challenges. For example, while Rufina teaches in a good school building, there are not enough tables and chairs, so the students must sit tightly next to each other during a lesson. This, of course, is an inconvenience for the students. Some students also have long distances between their home and school, so they often arrive late to school miss the opportunity to learn.

A unique challenge in schools such as Mata Kapore Catholic Elementary School is the language of instruction. All the students use the Kodi language in their daily life, including in school. Meanwhile, students are instructed in Indonesian. The students feel insecure when they are learning, especially when they are asked to speak. The lack of learning materials in Kodi is also a challenge. The only available learning media are Indonesian books. Rufina herself admits that her teaching ability as a high school graduate still needs improvement, especially in relation to the use of the mother tongue as a transitional language. 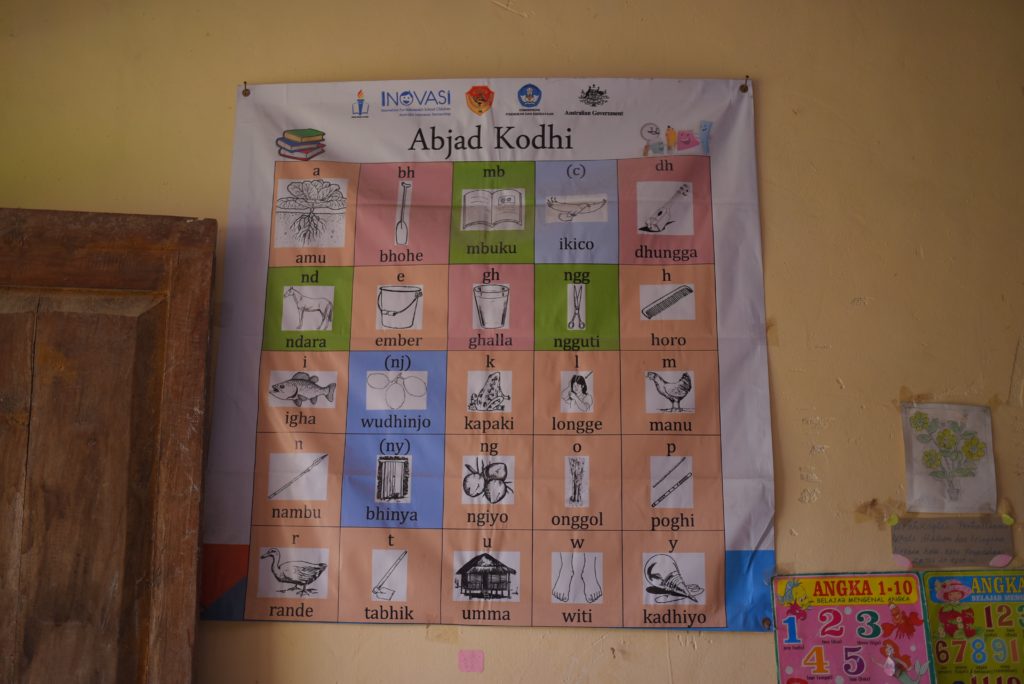 Mata Kapore Catholic Elementary School is one of the schools being assisted in the Mother Tongue- Based Multilingual Education Program (MTB-MLE) that is implemented by Suluh Insan Lestari (SIL) together with INOVASI in Southwest Sumba regency. At that time, Kodi was still a language that was only spoken, so to be used in learning, a language spelling system, or orthography, was needed. Compiling the Kodi language orthography was also the first step of the program.

In this mentoring program, teachers, including Rufina, participated in several trainings to learn how to use the mother tongue as a language of instruction and how to write creative stories in Kodi. The stories produced by the teachers were then presented in a storybook form. The book is available in a physical form and also in a digital form that can be accessed via a tablet that is also provided by SIL. An interesting fact is that these stories are bilingual, both in Kodi and Indonesian.

In addition to these stories, Rufina and the other teachers, who are now equipped with knowledge from the training, have developed other learning media, such as reading corners, science trees, alphabets in Kodi, picture books, game boards, and wall decorations that carry educational themes, to create a more attractive classroom atmosphere. Teachers were also assisted in making lesson plans (Rencana Pelaksanaan Pembelajaran, or RPP) that are contextual yet still refers to the 2013 curriculum.

According to Rufina, changes in the teachers’ learning approach and the existence of various supporting learning media have motivated the students to learn. Their eagerness to get to know more about the existing learning media, including how to use tablets, have made them even more enthusiastic. Slowly, their confidence is increasing.

Rufina hopes that the efforts she has made will help students to understand and learn faster so that they can become a smart generation and have a better future.