Nirmala, known as Ibu Guru Nirmala, was the homeroom teacher for grade six at SDN 1 Kuta, Pujut Subdistrict, Central Lombok. The teacher who graduated from Mataram University Elementary School Teacher Education (PGSD) struggles to increase reading and writing capabilites of her students including students with disabilites.

Nirmala had served as an honorary teacher at SDN 1 Kuta since 2017. In June 2022, she received a Decree (SK) of Appointment of Contract-Based Government Employees (P3K) as she had passed the selection tests.

Nirmala wants to create classrooms a second home for students to help children who don’t live with their parents, instead of living with grandma, grandpa and other relatives. This is because both parents of students passed away and some are remarried. This condition is one of the triggers for students hard to develop optimally in the learning process at school. Because generally those students receive less attention in their homes.

“Affection for children is indeed very important. Because of this, there are also children who rarely attend class, lood sad in class and rarely talk to their friends. Finally, I as a teacher must be able to replace the family figure or make the classroom the most comfortable home,”said Nirmala.

She said that in the classroom, she always gives students the opportunity to express their opinions or tell stories about what they are going through, both at school and at home. It was one of those attempts to recognize the child’s diverse character and was a challenge she had to face as a teacher.

Through this step, she was able to find some students who were considered to have problems in learning, among which were caused by the condition of students who did not live with their parents.

The way she did it was to approach the student and come to her house. Her efforts paid off. Because over time, children who have this problem can finally be helped and open up and get along with their other friends. Students’ interest in reading and counting also increased. 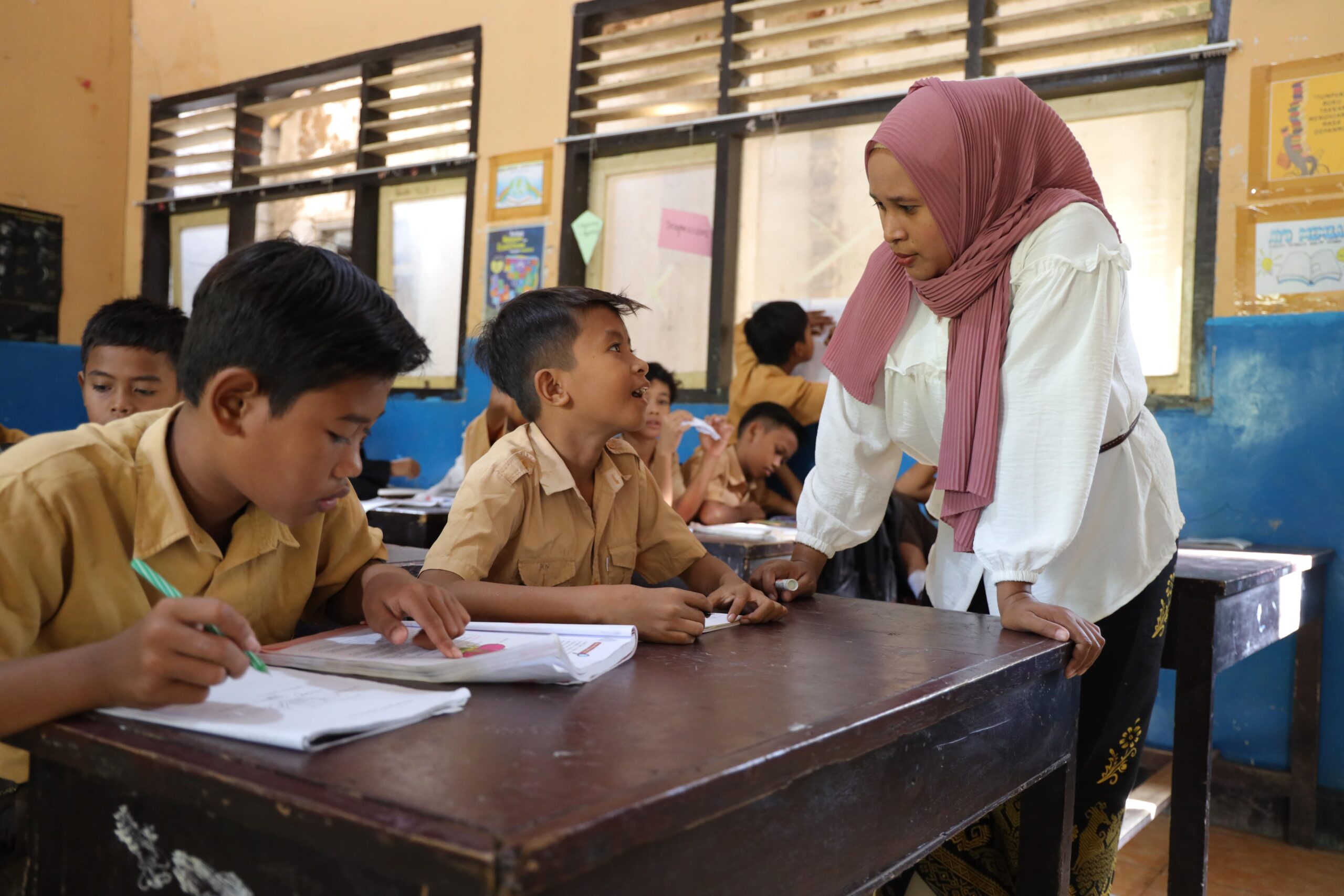 Nirmala admits that over the years she taught students in an ordinary pattern, namely teaching students by guiding the existing Learning Implementation Plan (RPP). Although. She realized that this pattern could not fully succeed in helping all students in learning process. Because the reality is that there are still grade VI students who cannot read and count.

Moreover, the school where Nirmala teach, was already appointed as an inclusive school, meaning that this school had many students with disabilities. A specific learning method for students with disabilities is obviously required since they found difficulties in learning the same material and method as other students. However, the existing RPP were, in fact, unable to address all of these problems.

For that reason, she participated in the Literacy Training for Grade One to Three of Primary School and Inclusive Learning. The Innovation for Indonesia’s School Children or INOVASI, in collaboration with the Central Lombok Education Office, organised this activity from October 2018 to April 2019.

From the training, she learned how to combine learning methods to accommodate all students appropriately. Additionally, she obtained training on how to adjust the lesson plans for students with disabilities.

“For example, we assign them different tasks from other students, so they find it fun and not difficult. It will be difficult for students with disabilities to follow the regular students’ learning pattern. However, it remains crucial to provide special teachers for special needs students,” explained Nirmala.

She taught students with disabilites gradually until they could read fluently. She also applied learning methods according to each student’s abilities. The program, called Semua Anak Cerdas (SAC) or All Children are Smart (proficient in basic literacy and numeracy skills), is a partnership program between the Central Lombok Education Office and Universitas Mataram with INOVASI.

The SAC program directs students to learn based on their level of ability. For instance, students at the level of understanding the alphabet are placed in the same group to enable the same treatment. Students also have the opportunity to collaborate with their friends of the same level.

The SAC program had created enjoyable teaching and learning process in schools. Additionally, this program has increased children’s enthusiasm and improved students’ literacy and numeracy skills by up to 70 per cent, where 50 per cent of the 365 students were illiterate before.

“Through this program, students who were previously unable to read have significantly improved their literacy and numeracy skills. After evaluating the program, we have identified a significant improvement in students’ skills; for example, those who could only read words can now read paragraphs,” she added.

The SAC program was considered effective at identifying children’s issues and characters in enhancing their literacy and numeracy skills. Such identification was the initial step to specify the students’ ability level when the SAC program was first implemented.

She admitted that understanding students’ characters and witnessing their rapid improvement, especially in reading and writing, has become her most exciting teaching experience.

“As an analogy, we know a wide range of animals, right? Say birds, snakes, chickens, and elephants. Instructing these animals to fly will only favor birds. From this illustration, we can conclude that every animal is different. Similar to students, they cannot be overgeneralised. They have different abilities and require various teaching strategies,” stated Nirmala.

Temu INOVASI #14 – Learning Transformation: Are We There Yet?