The Struggle Story of Ana Paji Jiara, a Teacher at SD Inpres Wunga Primary School in the Remote Part of East Sumba, to Fulfill the Learning Needs of Her Students

“I graduated from Payeti Christian High School in Waingapu in 2000. After that, I stayed at home, grew crops, and raised pigs to meet my daily needs. This school only had two teachers at that time. Then, my three friends and I were asked to help teach. We got only a small amount of ‘allowance’ of IDR20 to 50 thousand per month from the principal,” said Jiara.

“I was willing to teach there because I saw that the school had only two teachers at that time. I also felt for the students. They had to walk a long way to go to school. I am just a farmer. Even though I was only a high school graduate, I believed that I could teach as long as I was willing to learn,” said Jiara regarding her decision to become a teacher.

After 16 years, she is now a guru honorer (non-permanent teacher).  She now has a bachelor’s degree in education from an Open University. She graduated in 2016.

Most students of the school where Jiara teaches reside in the neighbouring villages, such as Walakari and Tanarara. The farthest is from Talicu village, which is 5 km from the school. According to Jiara, most of her students use the Kambera language in their daily communication. “About 70 percent of them, especially the early graders. So, teaching in their mother tongue is quite effective. That way, it is easier for them to understand the lesson,” she said. 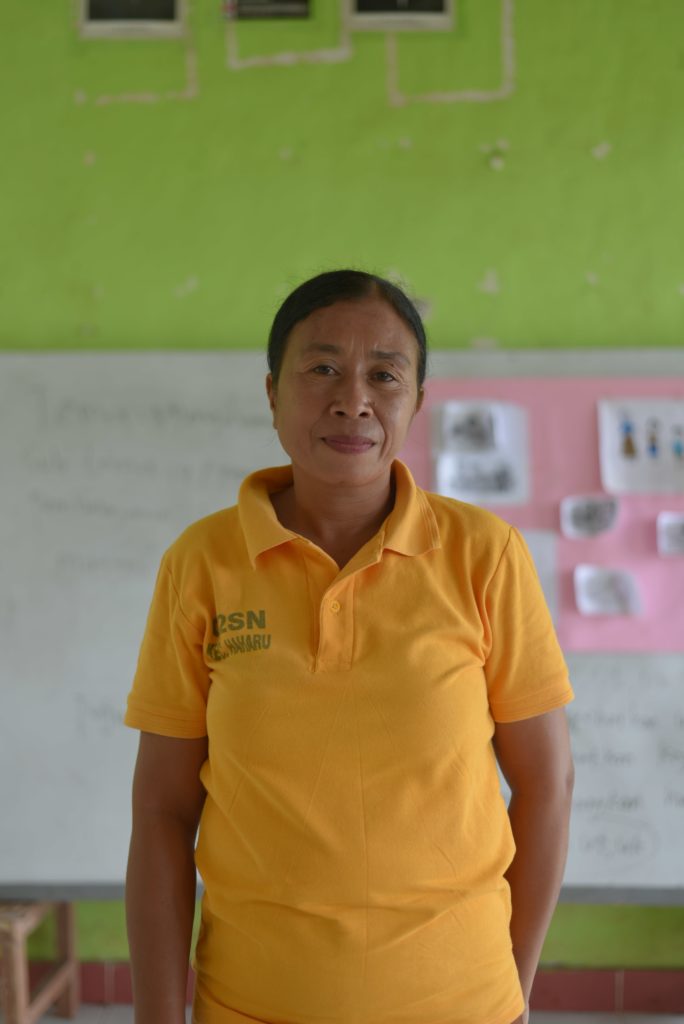 Jiara designs her class in such a way that supports learning in her students’ mother tongue. Various pictures and alphabet posters are put on all over the classroom’s walls to create a “reading zone.” A sheet of white blank paper with a picture of a fish and a pot of rice is placed side by side with a wide manila paper with the letters “Mm” on it to spell out the words: Mouth, Mother, Meal, Melon, Magazine, Motorcycle, etc. On the same wall, another piece of paper with a hand picture helps them recognize the numbers 1-10.

Jiara’s mother tongue-based learning strategy utilizes informative pictures. Jiara puts paper on the wall with pictures on it on the whiteboard and asks the students to guess the picture. These pictures are prepared by Jiara herself as teaching materials. She also writes on the whiteboard the themes and subthemes, as well as the materials and learning objectives for the day. After the students give the correct answer, Jiara spells the letters in the Kambera language.

Jiara admitted that she became a “real teacher” after receiving assistance from INOVASI. She received support in pedagogy and teaching early grade primary school students.

“Thanks to INOVASI who taught me to teach using local languages, as well as how to teach students to recognize and combine letters. I used to teach our students the alphabet from A to Z every day. So, the students got bored easily and found it difficult to understand because I used the Indonesian language when teaching,” said Jiara.

Teaching using students’ mother tongues is one of INOVASI’s breakthroughs for schools in remote areas such as Haharu in East Sumba Regency. This is because most students, especially those in the lower grades, use the Kambera language in their daily communication. Luckily, Jiara comes from this area. As a native speaker, she speaks the language in her everyday life.

“When I use the local language (Kambera language), the students are more active in answering questions. Language is no longer a barrier,” Jiara added. 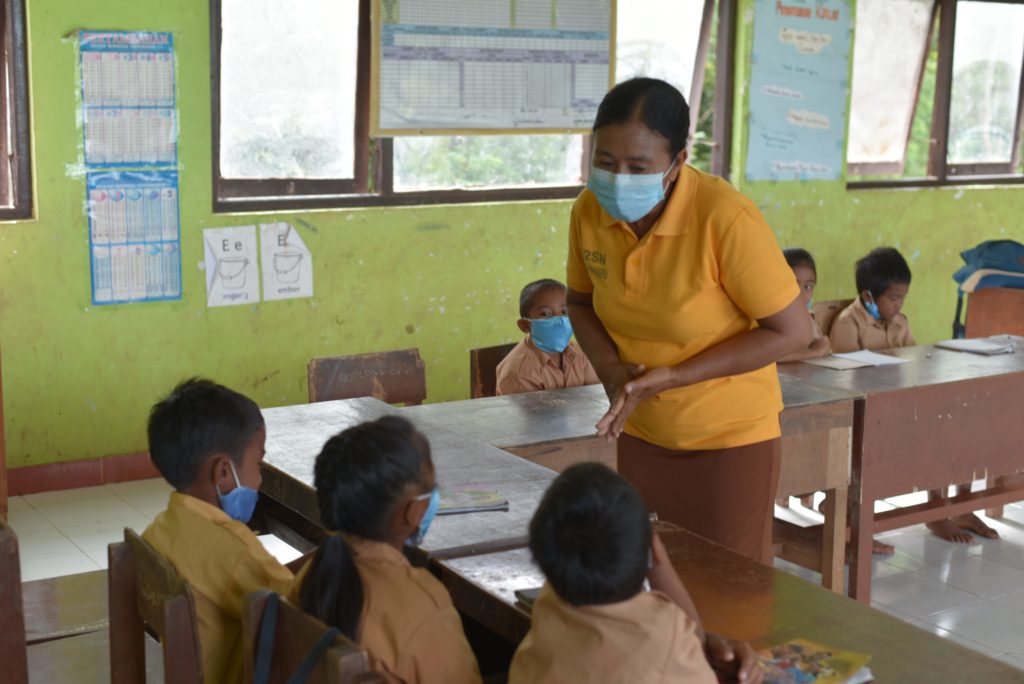 INOVASI has continued its mother tongue-based primary education program in East Sumba Regency since it was implemented in Phase I (2017-2019). According to the INOVASI study, it helped students communicate and express their opinions confidently in learning. It also increased their learning outcomes.

“I usually teach in the local language first, then I will mix it with the Indonesian language later. Based on my experience, so far, students can better answer questions in their mother tongue,” explained Jiara.

Prior to receiving training and mentoring for a learning program with students’ mother tongue as the medium of instruction, most partner teachers in East Sumba Regency admitted to having doubts and even worried about using their mother tongue in learning since it is not specified in any curriculum. Teachers were afraid that they would be reprimanded by the district education office. The Indonesian language is indeed required to be used as the medium of instruction in the national education as regulated in Law Number 20 of 2003 concerning the National Education System, and Presidential Regulation Number 63 of 2019 concerning the Use of the Indonesian Language. However, the same regulation also states that local languages are allowed to use, especially in the early grades.

Therefore, according to INOVASI, multistakeholder collaboration is necessary to strengthen the best practices that have been performed and disseminate them to schools and other areas with similar challenges.

The Head of the Educational Standards, Curriculum, and Assessment Agency (BSKAP), the Ministry of Education, Culture, Research, and Technology, Anindito Aditomo, during his visit to East Sumba Regency on September 28, 2021, stated that the use of mother tongue as transition language in learning, especially in schools where the majority of students use their mother tongue in daily communication, should have been applied a long time ago.