The COVID-19 pandemic has forced various activities to be limited. Schools are not allowed to carry out its regular activities, and children must learn from home. With these various limitations, children are unable to receive education as they did before. In response to this situation, the Lecturer Association of Teacher Training Institute (Lembaga Pendidikan Tenaga Kependidikan, or LPTK) NTB (West Nusa Tenggara) and the NTB Reading Consortium supported by INOVASI have launched the Literacy Volunteer Program. The focus of this program is to improve the basic literacy and numeracy skills of early grade students. There are hundreds of university students and literacy activists involved in the program. They directly accompany children who struggle with learning literacy and numeracy. One of these university students is Anasiana Pertiwi, an 8th semester student from the Teacher Training College (Sekolah Tinggi Keguruan dan Ilmu Pendidikan, or STKIP) Hamzhar, North Lombok regency.

For Ana, as she is more commonly known, this was her first experience as a volunteer. When Ana heard about the volunteer program supported by INOVASI, she immediately decided to take part. Ana was already familiar with the INOVASI program; she had heard about many interesting experiences from the seniors on campus who previously participated in it.

“They told me that when they joined INOVASI (volunteer program), they learned a lot and had the opportunity to visit remote schools,” said Ana. The stories from the seniors inspired Ana. When the opportunity to join the Literacy Volunteer program came along, Ana didn’t waste any time. Ana and four of her friends were sent from her campus, STKIP Hamzar, to join the program.

When they first became literacy volunteers, Ana and hundreds of her peers from various campuses and institutions didn’t immediately go to the field. They were first equipped via several training sessions facilitated by INOVASI. The entire equipping process was carried out online.

After receiving the initial training, these literacy volunteers were immediately dispatched to the field. At first, Ana assisted only one child; however, as time went by, what Ana was doing started attracting the attention of other children. Those children were then invited to study together, forming a group three students for Ana to assist.

“I was helping a second grader who couldn’t read. Then came a third grader and a fifth grader; they joined us because they couldn’t read even though they were already in the higher grades,” Ana said. Through learning together, the students remained interested and enthusiastic.

According to Ana, there were several positive values she received during the equipping activity, especially for a student of Elementary School Teacher Education (Pendidikan Guru Sekolah Dasar, or PGSD), such as herself. In addition to learning techniques and approaches in teaching literacy, the most important thing she gained from the program was awareness of the importance of literacy as a fundamental skill. According to Ana, this concept should be instilled in teachers and teacher candidates like her and her fellow students, noting, “It’s useless for teachers to stand in front of the class and give materials to their students who are unable to follow the material because of their poor literacy skills.”

Ana shared a memory about her experience as a RELASI volunteer (Relawan Literasi, or Literacy Volunteer). According to Ana, the mother of a child she was assisting really cared about her child’s education, especially in terms of reading skills. This mother cared so much that even though she was busy and tired because she had to go out every day and find grass to feed their livestock, she still took the time to accompany her child to read even though she herself is illiterate.

The mother also often took the time to share her child’s progress with Ana. Ana still recalls how the mother told her with such enthusiasm that her child had started to read independently at home. This progress encouraged the mother to accompany her child as the child reads at night, even though she herself is still overcome by fatigue when she returns home after a long day of looking for grass. 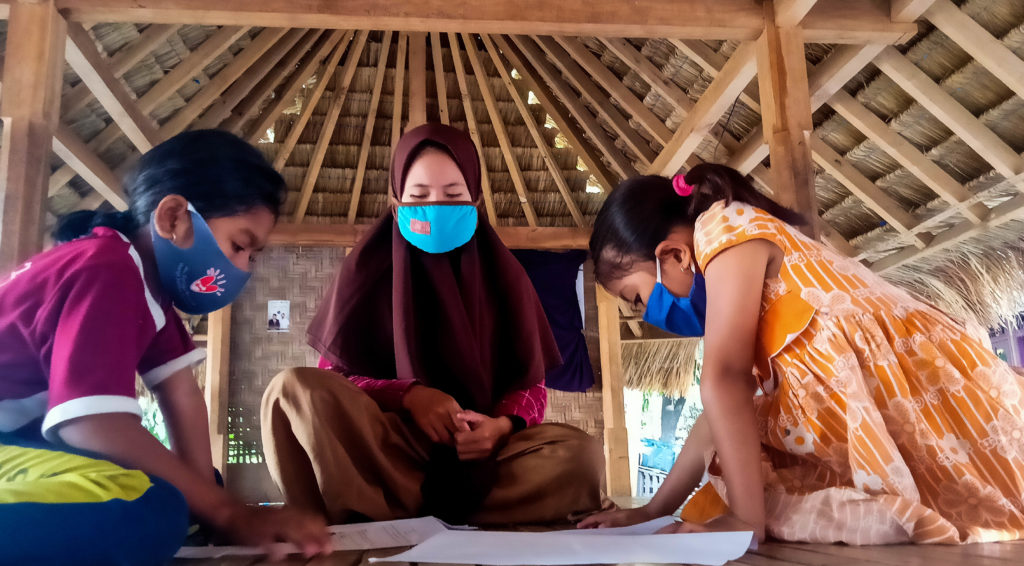 The first phase of the Literacy Volunteer program was completed in December 2020. Ana continuously takes the time to share her experience with her fellow PGSD students, and she also introduced these approaches when they participated in the Introduction to School Field activity some time ago.

Ana isn’t the only one with positive stories from about participating as a volunteer during the pandemic. There are many more inspirational stories about young people involved in helping students who face difficulties in learning literacy. This has prompted STKIP Hamzar, where Ana studied, to make a commitment to the North Lombok Regency Education Office to continue this literacy volunteer activity. The plan is that at least 25 students will be sent out once again as literacy volunteers in late in February.