Home/
Stories/
Multi-Stakeholder Collaboration is Needed to Encourage the Use of Mother Tongue in Early Grade Learn...

On the map, East Sumba District stretches across the left tip of Sumba Island in East Nusa Tenggara. East Sumba’s very diverse landscape brings a variety of accessibility challenges. During the rainy season, access to many areas is cut off due to flooding. These areas are home to a total of 72 schools. The majority of the local residents, including children, are only able to use the local language or mother tongue, Bahasa Kambera, for day-to-day communication.

This has become a challenge for learning in schools as during teaching, teachers generally use Indonesian. Meanwhile, according to the local government, about 50% students do not have full understanding of the Indonesian language.

Quoting the Policy Brief Number 9, July 2021, Center for Policy Research, Ministry of Education, Culture, Research and Technology (MoECRT), which cited the 2010 census result from Statistics Indonesia, more than 16 million Indonesian citizens are not able to speak or do not understand Indonesian, of which 22.8% are 5-9 years old citizens or children in the early grades of elementary school.

The Policy Brief recommended using mother tongue for learning as the language of instruction before transitioning to Indonesian. This was suggested as one of the solutions proven to improve the quality of process and student learning outcomes. Nevertheless, this solution is not without challenges.

One challenge is that the majority of teachers in these small and remote elementary schools are high school graduates; in fact, some do not even speak the local language as they come from different regions.

In East Sumba District, INOVASI has continued the mother tongue-based basic education program which has run since Phase I (2017-2019). The program implementation in Phase I yielded positive outcomes. The children became more confident in communicating and expressing their opinion while learning and their learning outcomes, therefore, improved.

The use of mother tongue to teach learning materials to students surely is the right way to go for single language speakers of mother tongue, such as children in areas of East Sumba District. A good example is on understanding Pancasila values. How can they implement them if they do not know the meaning of the words in the five principles of Pancasila?

Using a language understood by the children for instilling moral values is part of the effort to build a strong Indonesia. This can be done through various methods, such as using storybooks for promoting virtues and local wisdom. At the same time, these books serve as learning media to improve children’s literacy. 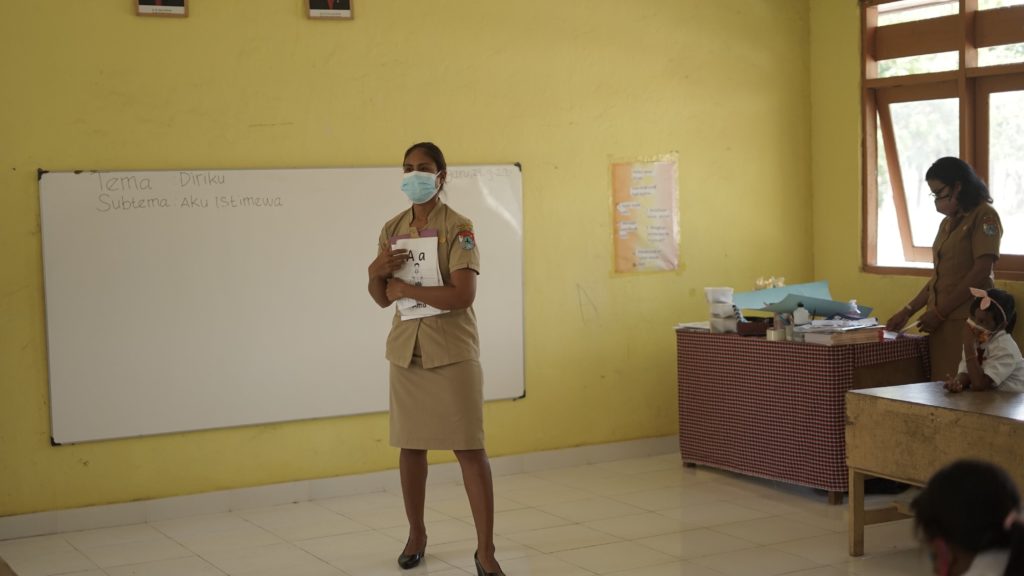 The practice of developing bilingual stories by teachers in INOVASI partner schools, part of the mother tongue-based basic education program in Southwest Sumba and East Sumba Districts, should be continued and developed. The teachers in Southwest Sumba use a tablet, equipped with sounds, as media to save and manage the stories. Teachers in East Sumba use a different method; they put the stories into the Big Books. Despite the different formats, both have proven to improve students’ interest in reading and their learning.

Support required for collaboration between the local government and schools

Their reason was that the use of mother tongue in learning is not stated in any curriculum; therefore, teachers using it usually receive a warning from the Education Office. It is worth noting that the use of local language in learning was agreed in the Law Number 20 of 2003 on National Education System and the Presidential Regulation Number 63 of 2019 on the Use of Indonesian Language. Nevertheless, the implementation has not been optimized.

Multi-stakeholder collaboration is, therefore, needed to strengthen good practices which have been conducted and scaled out to other schools and areas with similar challenges.

While visiting East Sumba District on 28 September 2021, the Head of Standard, Curriculum and Education Assessment Bureau (“BSKAP”) of MoECRT, Anindito Aditomo, stated that the use of mother tongue in learning, particularly in schools whose majority of students use mother tongue in day-to-day communication should have been implemented since long ago.

“If they don’t (use mother tongue in learning), students are forced to learn two things at once; first, they learn to recognize Latin letters and how to read them, and second, they learn a foreign language (Indonesian language). The difficulty doubles yet, this could be easily solved by using mother tongue as the language of instruction,” said Anindito. 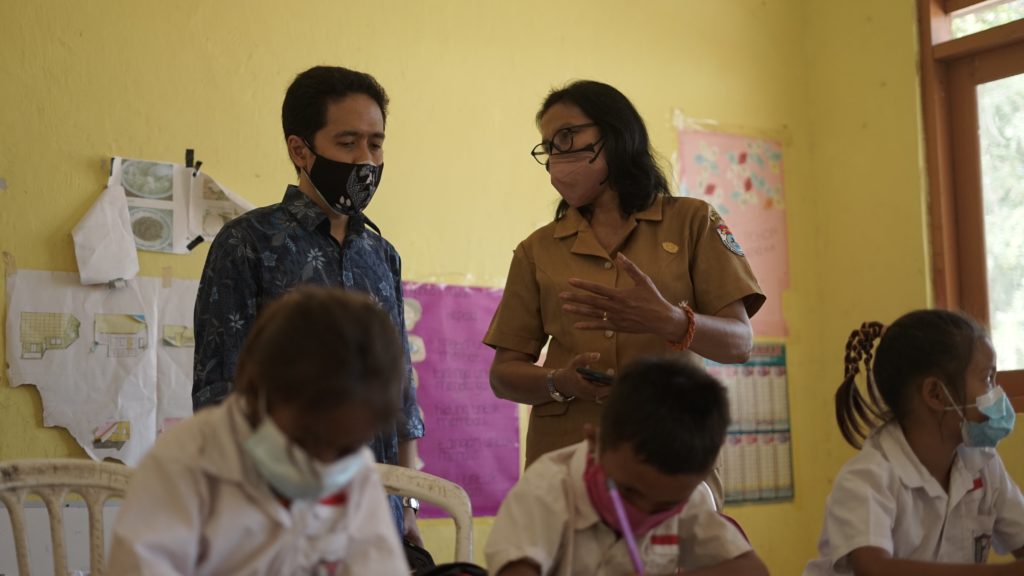 According to Anindito, the approach used by those elementary school teachers was beneficial and sided with the children because the learning has become more fun and effective. Therefore, the central government needs to review the curriculum of Teacher Training Institute to better suit the condition and needs in the field, particularly literacy learning and the use of mother tongue.

“What may have a faster impact, however, is scaling out these good practices to other schools through the local government (of East Sumba). This is very important to do because basic literacy is the foundation for learning on the next level. If it fails at the beginning, the next learning will surely be met with difficulty,” expressed Anindito.

He added, ensuring children to have adequate literacy abilities when they are still in the early grades is a lot cheaper and easier than fixing it later when they are in the upper grades, especially in middle school and high school.

This recommendation from the Head of BSKAP was warmly welcomed by the Head of East Sumba District, Kristofel A. Praing. When having Anindito and the BSKAP team in his house, the day before the school visit, Kristofel, the Head of District, stated his willingness to support the effort of scaling out good practices conducted by the INOVASI program, including mother tongue-based basic education.

Meanwhile, schools also need to provide a room for CPD (Continuous Professional Development) for teachers who are able to implement the use of mother tongue as a transitional language in learning. This may be in forms of BOS fund allocation for teacher training or procurement and development of contextualized and bilingual learning media.