When delivering the opening speech, the Deputy Governor of West Nusa Tenggara expressed her appreciation to all development partners who have contributed a lot to the progress in the Province of Thousand Mosques. She mentioned that one of the proud gifts on the province’s 64th anniversary was the increase in the ranking of West Nusa Tenggara’s Human Development Index, which placed second nationally. 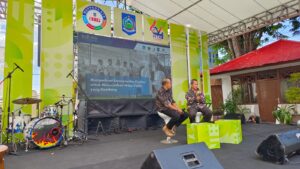 “Moreover, this result can only be achieved because of the performance of all local governments. Consistency, enthusiasm, togetherness and collaboration are the factors supporting this success,” she said.

INOVASI was present at the exhibition with Begibung, one of the community partners who has been providing basic literacy assistance to children in the city of Mataram and in the West Lombok region. Various efforts that have been made by INOVASI and its partners so far were displayed to a wider community at the exhibition. For example, matters related to the work of literacy volunteers, and literacy learning approaches that suit the students’ ability levels. On this occasion, various children’s reading materials that have been distributed to various schools/madrasah and literacy activist communities in West Nusa Tenggara were also displayed. 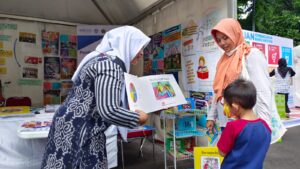 On the last day, INOVASI and Begibung community had the opportunity to participate in a talk show session. The opportunity was used to build awareness on how important it is to pay attention to basic literacy issues in order to create a better future for West Nusa Tenggara.

Temu INOVASI #14 – Learning Transformation: Are We There Yet?